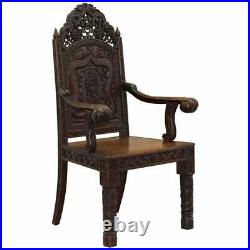 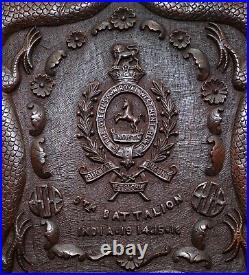 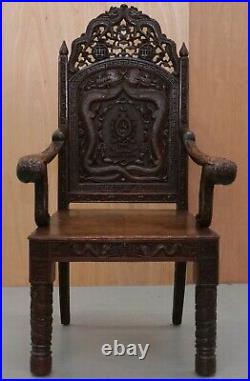 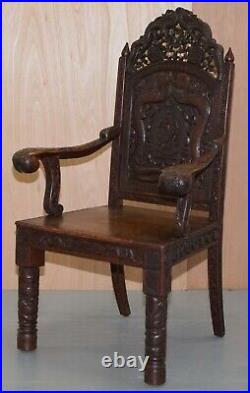 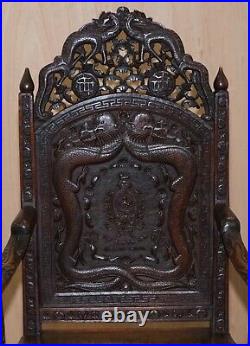 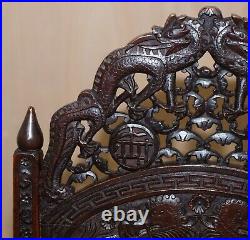 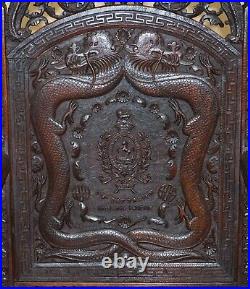 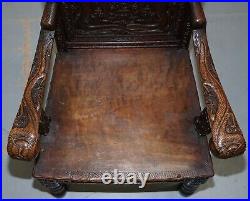 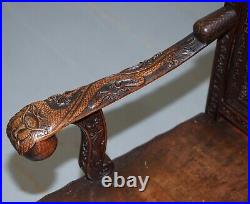 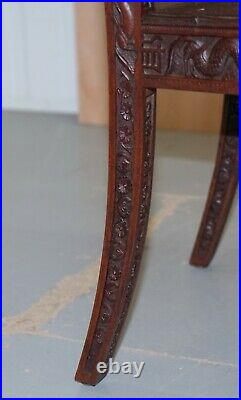 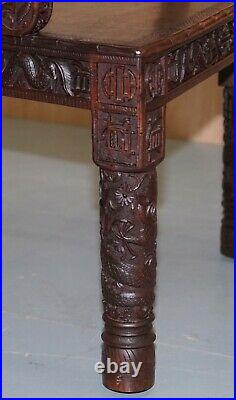 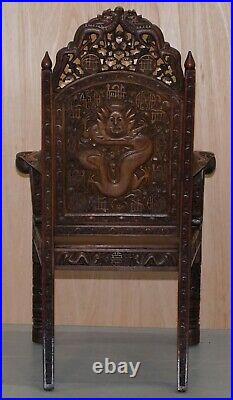 The Queen’s Own Royal West Kent Reg, 5th Battalion India 1914 – 1916. This chair is a one of a kind piece, it is a very high quality well made and rare Chinese export late 19. Century throne armchair, the chair has foliage detailing all over. The carved top rail as dragons above a carved back support surrounded by a Greek Key border, the carved arms and handgrips as dragons, with a boarded seat above carved forelegs. The middle back has been carved as a tribute for The Queen’s Own Royal West Kent Reg, 5th Battalion India 1914 15 16. This chair will be the only one of its type, clearly made for someone of great substance with a military career worthy of remembrance. We have deep cleaned hand condition waxed and hand polished it from top to bottom, there will be patina marks from honest age and genuine use, structurally the chair is perfect. Width:- 66.5cm. Depth:- 56.5cm. Please note all measurements are taken at the widest point, if you would like any additional or specific measurements please ask. The Regiment was first raised in 1755 during the tensions of the Seven Years War (1756-63), initially numbered as the 52nd Regiment of Foot but renumbered as the 50th in 1757 after the existing 50th and 51st Foot were disbanded. It saw little action in the early years; raiding the French coast, posted to Ireland and then Jamaica. The Regiment did not see any official action until the Battle of Ushant (1778) during American War of Independence, serving as marines. In 1782 Regiments without Royal titles were awarded county titles to aid recruitment from that area, therefore the 50th became 50th (West Kent) Regiment of Foot. In 1827 the Regiment was awarded the title of the Duke of Clarences and when he ascended to the throne in 1831 as William IV, the Regiment was renamed the Queens Own after Queen Adelaide. In 1834 the Regiment sailed to Australia guarding convicts and then served there for seven years. In 1841 the Regiment moved to India until 1848 fighting in the Gwalior campaign and the First Sikh War (1845-46), and then the Crimea War (1854) and then went on to served in Ceylon (now Sri Lanka). In 1881 as part of the Childers Reforms the 50th was merged with the 97th (The Earl of Ulsters) Regiment to form the Queens Own (Royal West Kent Regiment). The Childers Reform restructured the British army infantry Regiments. The reorganization created a network of multi-battalion Regiments each having two regular and two militia battalions except in Ireland were two regular and three militia battalions became the standard. The Regiment went on to serve during the Second Boer War and two World Wars with further amalgamations following. In 1961 the Regiment was merged with East Kent Regiment, to form The Queen’s Royal Surrey Regiment and then in 1992 it was amalgamated with The Royal Hampshire Regiment to form The Princesses of Wales’s Royal Regiment. In the BBC TV series Dads Army the Home Guard platoon wore the cap badge of the Queen’s Own Royal West Kent Regiment. Queen’s Own (Royal West Kent Regiment) during WW1. Since 1815 the balance of power in Europe had been maintained by a series of treaties. In 1888 Wilhelm II was crowned German Emperor and King of Prussia and moved from a policy of maintaining the status quo to a more aggressive position. He did not renew a treaty with Russia, aligned Germany with the declining Austro-Hungarian Empire and started to build a Navy rivalling that of Britain. These actions greatly concerned Germanys neighbours, who quickly forged new treaties and alliances in the event of war. On 28th June 1914 Franz Ferdinand the heir to the Austro-Hungarian throne was assassinated by the Bosnian-Serb nationalist group Young Bosnia who wanted pan-Serbian independence. Franz Joseph’s the Austro-Hungarian Emperor (with the backing of Germany) responded aggressively, presenting Serbia with an intentionally unacceptable ultimatum, to provoke Serbia into war. Serbia agreed to 8 of the 10 terms and on the 28th July 1914 the Austro-Hungarian Empire declared war on Serbia, producing a cascade effect across Europe. Russia bound by treaty to Serbia declared war with Austro-Hungary, Germany declared war with Russia and France declared war with Germany. Germanys army crossed into neutral Belgium in order to reach Paris, forcing Britain to declare war with Germany due to the Treaty of London (1839) whereby Britain agreed to defend Belgium in the event of invasion. By the 4th August 1914 Britain and much of Europe were pulled into a war which would last 1,566 days, cost 8,528,831 lives and 28,938,073 casualties or missing on both sides. This item is available for collection from our Wimbledon warehouses SW19-3BE, we can have it delivered nationwide to include Scotland Wales and Ireland. Wimbledon-Furniture is a privately owned family ran business out of Wimbledon SW19, we have four large storage warehouses, if you have any questions my number is under the business sellers information, please feel free to call or text. Please view the very detailed pictures as they form part of the description around condition. Please note vintage period and original items such as leather seating will always have natural patina in the form of cracking creasing and wear, we recommend regular waxing to ensure no moisture is lost, also hand dyed leather is not recommended to sit in direct sunlight for prolonged periods of time as it will dry out and fade. COURIER (LARGE ITEMS ONLY THAT CANT BE POSTED). Whoever delivers will always require help on the larger items to unload, the price you will be quoted will always be based on this assumption, if this is not possible please let us know as it will affect the price to send a two man team. The item “THE QUEENS OWN ROYAL 5TH BATTALION INDIA CARVED CHINESE EXPORT DRAGON ARMCHAIR” is in sale since Friday, August 9, 2019. This item is in the category “Antiques\Antique Furniture\Chairs\Victorian (1837-1901)”. The seller is “wimbledon-furniture-01″ and is located in London Wimbledon. This item can be shipped worldwide.